Reviewed by: Carla
Review: How to catch a mouse is a story about an orange cat called Clemmie. Clemmie is a amazing mouse catcher! Clemmie is great at stalking and chasing. Clemmie is always patient and alert. Clemmie knows that a mouse has a whiskery pointy nose,two round ears,and a long pink tail. Although Clemmie has never seen a mouse. Clemmie believes that all mice are afraid of her. Clemmie is still on the lookout. Clemmie looks and looks for a mouse. Every time Clemmie thinks she has finally found the mouse its turns out to be a hat,toy panda,and a spider. Clemmie proudly decides to nap on the couch certain there are no mice in this house. Suddenly just as Clemmie is about to drift off to sleep she hears as sound. Clemmie sees something on the ground. It has a long pink tail,two round ears,and a whiskery pointy nose! Clemmie has found her first mouse!!! Clemmie is sad she has seen the mouse but it has run away…….. Clemmie has an idea. Clemmie disguises herself like a human! As the mouse walks by Clemmie rips off her disguise and bolts after the mouse! How to catch a mouse was very exciting at the end of the book because Clemmie finally gets to run after the mouse. I liked best how cute Clemmie is. ( Clemmie reminds me of my own cat Fluffers). Overall How to catch a mouse is a great book about cats and mice. 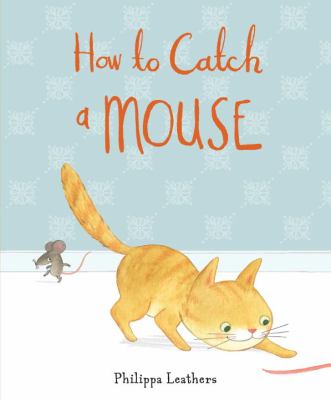