Reviewed by: Carla
Review: Barbie in the pink shoes Ballet Dreams is a story about a girl named Kristyn. Kristyn wants to be a star like Tara but she doesn’t want to dance like Tara. Kristyn rips her shoes while dancing. Kristyn and her friend Hailey go get new shoes. When Kristyn puts on the shoes she and Hailey are transported to a ballet world. Kristyn is the lead in the ballet! The snow queen arrives angry that Kristyn and Hailey are here. Kristyn and Hailey run away. The girls arrive in the story of the Swan Queen. Kristyn changes again now shes the Swan Queen! Kristyn dances with a prince he falls deeply in love with her. A wizard wants the prince to marry his daughter. So he turn Kristyn and Hailey into swans. Kristyn and Hailey fly to the palace they have to help the prince. The wizard makes his daughter look like the Swan Queen. They trick the prince. Kristyn and Hailey arrive just in time. The spell is broken! The prince and Kristyn dance together. The snow angrily arrives. She is angry that Kristyn is changing the story. The snow takes Hailey with her to her ice palace! Kristyn hurry’s there. The Snow Queen attempts to put a spell on Kristyn but Kristyns dancing breaks the spell. The Snow Queen melts and Kristyn has saved Hailey. Kristyn takes off the pink shoes and she and Hailey are transported back home. At the big show Kristyn dance in her own unique way. The audience love Kristyns dancing! Kristyn and Tara curtsy. Kristyn did not dance like Tara she danced the way that felt right to her! The book was very exciting when Kristyn was defeating the Snow Queen. I liked best that in each new story that Kristyn entered she had a beautiful new dress. Overall Barbie in the pink shoes Ballet Dreams is a great book with an amazing lesson. 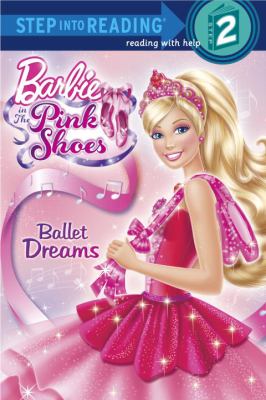