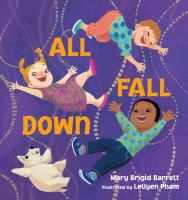 Reviewed by: Annika
Review: This book was funny and exciting, as it repeats the words all fall down, and everything falls down.
Overall Rating: 4/5

Reviewed by: Sarah
Review: Lauren Oliver’s Delirium was a beautifully written novel about a rule-following girl Lena and her adventure as she approached the date in which she is supposed to be “cured” from the worse disease imagineable, love. Through Lena’s adventures she discovers what love truly feels like even if the price she has to pay may be her life or the life of her new friend Alex. This Novel is a true page turner and kept me up for hours past my bedtime wanting more and the excitement consistent throughout the entire book and has me wanting to read the next book pandemonium.
Overall Rating: 5 (Awesome)

Reviewed by: Sarah
Review: Kyla is released from hospital after she was recently slated (a process of which is supposed to be a second chance for someone who was a terrorist or posed a threat to the government) Kyla moves into her new house along with her new family. Kyla goes to school like a normal slated girl and makes friends like a normal slated girl but when her one dream continues reoccurring and Kyla starts to remember her past she realizes that her past isn’t so pretty and when her friend Torri disappears and then her boyfriend Ben disappears Kyla knows something’s up. if only she knew who she could trust with her not-so-legal journey into uncovering the frightening secrets of the lorders and their true purpose. If Kyla trusts the wrong person she could end up dead or worse, a servant to one of the trickiest characters.
Overall Rating: 4

Reviewed by: Sarah
Review: Samantha Kingston goes through February 12 th as it were just another day but little dose she know, it’s her last. Samantha gets caught with her death day being Groundhog Day. Samantha goes through the same day seven times and learns what and who the most important things are. Will Samantha be able to get out of her Groundhog Day cycle or will she eventually give up hopes or do her best to be sure that no one else ends up dead after her death. This book made me cry and laugh and sometimes at the same time. I would recommend this book to anyone 13 and up due to the language of the book and the choices of some of Samantha’s friends. This is my favourite book from Lauren Oliver but all her other books are just as magnificent
Overall Rating: 4

Reviewed by: Annika
Review: I like this book because, at the end of the book the caterpillar turns into a beautiful butterfly.
Overall Rating: 5 (Awesome)/5 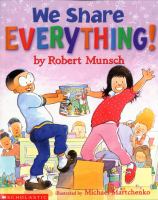 Reviewed by: Annika
Review: We Share Everything was funny, it was about a boy and a girl learning to share everything when they went to kindergarden.
I love Robert Munch stories.
Overall Rating: 3 (Okay)/5
Reviewed by: Selah
Review: The book is about Amelia Earhart, she was a very famous flyer. She wanted to stand out as a women and show all women that girls can do what men do. she did this by setting records and being famous. The story happened in her airplane. My favourite character is Amelia Earhart because she is a real adventurer. The book made me cry when she and her friend crashed their plane.
Overall Rating: 2

Reviewed by: Selah
Review: The Action Bible is about Jesus’ love for us. The story takes place in the bible days. My favourite character is Jesus because He was like the superman in the story, He was always so gentle and Holy. Both, like when He died on the cross it made me cry to think about the pain He went through.
Overall Rating: 5 (Awesome) 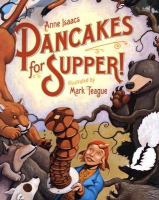 Reviewed by: Annika
Review: I liked best when Toby flew into the sky. The animals came to eat her, and in order to save her life she gave them her clothes.
I thought this book was funny, because at the end of the book they ate pancakes for supper, and I like pancakes.
Overall Rating: 4/5

Reviewed by: Ishaal
Review: This book is okay. My favourite part is when they bring bears to the saber tooth tigers and defeat them.
Overall Rating: 3 (Okay)

Reviewed by: Ishaal
Review: This is a good book and a thrilling adventure. My favourite character is Thea Stilton . In this book she got missing so Geronimo and Trap, Susie and a tour guide named Vaitea have to find her. At the end they talk about another adventure to Peru.
Overall Rating: 4 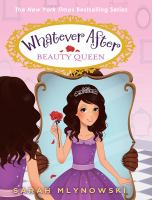 Reviewed by: Ishaal
Review: This book is the best in the whatever after series. It’s about Abby trying to bring back her brother Jonah’s memories about their magic mirror so she is happy when the mirror sucks them into Beauty’s story. But this time Jonah messes up the story like six others before. In the end Abby gets turned into a beast as well. And they almost get stuck in the story Beauty and the beast.
Overall Rating: 5 (Awesome)

Reviewed by: Deanna
Review: The book was about a girl, Rosamond, who started a book club. Her book club liked to eat treats like cookies. One day the recipe for her cookies were stolen! She called Nate the Great for help. So Nate and his dog Sludge looked for clues to the stolen recipe.
My favorite character was Rosamond because it was her mystery!
I love mystery books!! I read the book without taking a break!!
Overall Rating: 3 (Okay)

Reviewed by: Sophie
Review: The book is about a mermaid named Shelly who was going to her first day at school at Trident Academy, but she is nervous about it. Shelly worries that she won’t fit in with the other mermaids. The story happens in the ocean. My favourite character in the story is Shelly because she looks pretty. The story makes me laugh.
Overall Rating: 4

Reviewed by: Ishaal
Review: This book had very sad parts at the end. My favourite character is Amy Cahill. This book is about a doomsday device made by the Cahills enemies the vespers. There are two deaths at the end. But they still win.
Overall Rating: 5 (Awesome)

Reviewed by: Delaney
Review: There was a big show and everyone was watching. My favourite part was when they danced and did their show.
Overall Rating: 4/5

Reviewed by: Delaney
Review: My best part was all of it! I loved Belle and her cute wiggly puppy!
Overall Rating: 5 (Awesome)/5